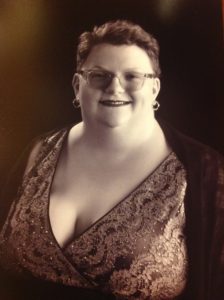 Cecily Laney Nipper received her high school diploma at the age of seventeen, and worked as a teacher and missionary while earning her associate’s degree in Secretarial Studies in 2008. In 2012, while working as an Administrative Assistant, she became legally blind from an acute attack of Glaucoma. Her job title changed to transcriptionist, a business she conducts from her home.

She joined the East Georgia Chapter of the Georgia Council of the Blind in 2012 and received an education in the work and advocacy of the American Council of the Blind, working her way up from her first job on the hospitality committee to president of the state organization, the Georgia Council of the Blind over a period of 10 years, serving in many roles including vice president, president, and secretary of her local chapter as well as chair of state committees. Her local, state, and now national aspirations, along with a passion for serving blind and visually impaired people, motivate her at each hurdle.

She received the President’s Diamond Award for her work on the Youth Committee, a committee which distributed device grants to visually impaired students K-12 in the state of Georgia. She was the youngest president elected in GCB’s history at age 34.

While recovering from some physical problems in 2017, Cecily discovered Dawn Wells and was introduced to Angel Eyes Fitness and Nutrition. She has served on their board of directors as board secretary since 2019. She participates regularly in the classes for her own health.

In addition, Cecily was certified as a peer supporter by Disability Link in Tucker, Georgia in April of 2021. She made her first trip to advocate on Capitol Hill in February of 2020 at the ACB Leadership Conference. She coordinated zoom meetings with Georgia legislators during the pandemic, but has been able to advocate in person at the Georgia capitol several times on recent legislation.

In her personal life, she enjoys reading talking books, studying braille, and taking long walks with her guide dog. She also coordinates the altar guild at her local church, where she attends regularly.